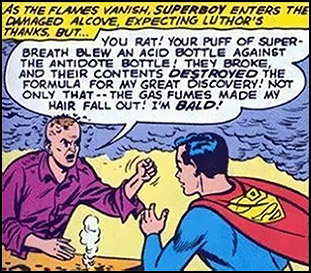 Some don't take it as well as others.
Advertisement:

Be it via alopecia or a similar condition, really early onset male pattern baldness, some sort of accident... it's not as though high school wasn't already hard enough, now you're losing your hair a few decades early.

Some may try to hide it with combovers, some may go 'au naturel' or just shave all their remaining hair off to stop looking patchy, but it will often be a sore spot. A few will embrace it and not let it get them down.

A prematurely bald head is not to be confused with a shaved one (unless, as mentioned above, the man shaved his head because he was balding anyway).

See also Bald Head of Toughness. Contrast Charlie Brown Baldness, where a character has hair that's drawn as being (almost) bald. When done with a small child, or a teenage girl, it's usually case of the Littlest Cancer Patient. Compare Prematurely Grey-Haired.