Theatre / You Can't Take It with You 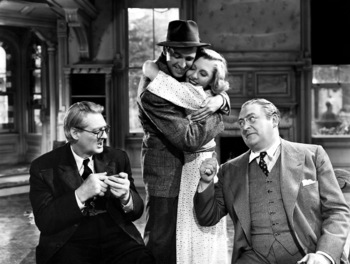 You Can't Take It with You is a Pulitzer Prize-winning 1936 Screwball Comedy play by George S. Kaufman and Moss Hart, later adapted into a 1938 film (directed by Frank Capra, starring James Stewart, Jean Arthur, and Lionel Barrymore), and still later as a forgotten 1987 syndicated television series.

Set during The Great Depression, the plot is centered around the lives of the Quirky Household of the Sycamore family. The household includes eccentric but kind patriarch Grandpa Martin Vanderhoff; his daughter Penny, an amateur playwright; her husband Paul, who is a fireworks engineer with his friend Mr DePinna; and their two daughters Alice, the Only Sane Woman; and Essie, an amateur ballerina trained by a crazed Russian; Boris Kolenkhov and wife of Ed, a printer and xylophone player. Also in the house is the Sassy Black Woman maid Rheba and her Cloudcuckoolander boyfriend, Donald. The main conflict of the work involves Alice falling in love with Tony Kirby and how Tony's wealthy banker father, Anthony P. Kirby and his snobbish mother strongly disapprove of the match, especially after a disastrous Dinner Party where the families were supposed to become acquainted. Throw into the mix a drunken actress, Gay Wellington; an exiled Russian Countess, Olga Katrina; and various FBI and IRS agents, and you have a play beloved by High School drama clubs nationwide.

The film won the Academy Award for Best Picture of 1938, as well as Best Director for Capra (his third such award in five years after previously winning for It Happened One Night and Mr. Deeds Goes to Town). It was also something of a Star-Making Role for Stewart, who had been working in Hollywood since 1935 but saw his career really start to take off following this film.

Alternative Title(s): You Cant Take It With You