Film / The Adventures of Sherlock Holmes (1939) 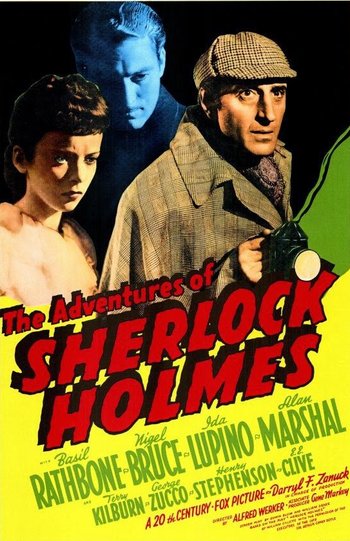 The struggle of the super-minds in the crime of the century!
"In all my life I have encountered only one man whom I can truthfully call the very Genius of Evil — Professor Moriarty. For eleven years he has eluded me. All the rest who have opposed him are dead. He is the most dangerous criminal England has ever known."
— Journal of Sherlock Holmes, 9 May, 1894
Advertisement:

A 1939 Sherlock Holmes film produced by 20th Century Fox as an immediate sequel to their hit production of The Hound of the Baskervilles (1939) that premiered earlier in the same year. This is the second film to star Basil Rathbone and Nigel Bruce as Holmes and Watson and the first where they got top billing. It would also be the last film where they would be in a Victorian setting. After Fox lost the rights, Universal picked them up but they decided (probably for fiancial reasons) to have Holmes and Watson in the present day. In the meantime a radio spinoff was picked up, and Ratbone and Bruce would continue to play their parts in both mediums until 1946.

The credits claim the film is based off William Gillette's famous melodrama, but in truth it's an entirely original pastiche.

The films chronicles Sherlock's battle with his Arch-Nemesis Professor Moriarty. After barely getting off a murder charge at the Old Bailey, due to Holmes having the misfortunate to uncover new evidence destroying Moriarty's alibi ... mere minutes after the jury has rendered their verdict of not guilty. Moriarty taunts Holmes that he's going to break him by pulling off the "Crime of the Century" and that Holmes will never suspect a thing until it's too late - than Moriarty can retire and devote himself to abstract sciences.

The next day Holmes gets two visitors: Sir Ronald Ramsgate, Constable of the Tower of London and a young heiress Ann Brandon. Sir Ronald comes with a letter that states that next Crown Jewel to be added to the collection, the Star of Delhi will never reach the Tower and asks Holmes to be on hand when the jewel arrives. Miss Brandon comes with another letter - a drawing of a man with a bird hung around his neck that was sent to her brother. Ann and her brother have seen one like it before - their late father was sent one just before he was murdered. This of course entices Holmes who eagerly takes up the case, while Watson ruefully reminds him that Moriarty is still at large. And unknown to Holmes, Moriarty wants him on the Brandon case....