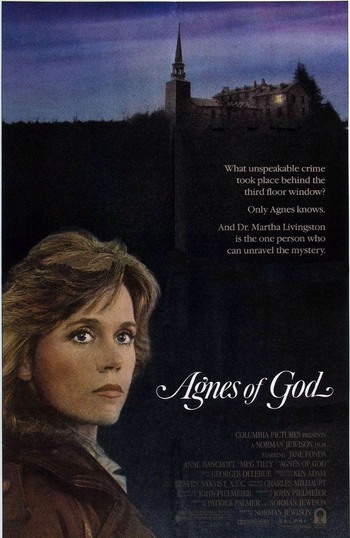 Agnes of God is a 1985 American mystery/drama film directed by Norman Jewison and starring Jane Fonda, Anne Bancroft and Meg Tilly. It is based on the 1979 play of the same name by John Pielmeier, which was based in turn on a Real Life case

that took place in New York during The '70s.

The story is about Agnes (Tilly), a novice nun from a convent in Montreal, who gives birth and insists that the dead child was the result of a virgin conception. A court-assigned psychiatrist, Dr. Martha Livingstone (Fonda), and the convent's mother superior, Mother Miriam Ruth (Bancroft), clash during the resulting investigation, since Martha wants to help Agnes face reality and handle it better but Mother Miriam wants to shield her from a truth that has shattered her; in the meantime, the mentally-challenged and childlike Agnes offers subtle clues regarding who is actually responsible for the birth (and death) of the child...

The film was nominated for three Academy Awards and two Golden Globes, with Tilly's performance earning her the latter for Best Supporting Actress.

"I want to believe that she was blessed. And I do miss her. And I hope she's left something; some little part of herself with me. That would be miracle enough... wouldn't it?"
— Dr. Martha Livingston