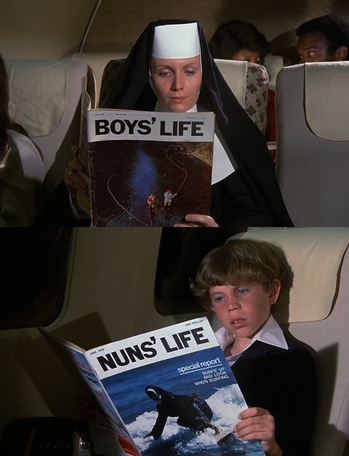 Sister Mary's surfing habit is nun of your business.
Advertisement:

A counterpart to Nuns Are Spooky, Nuns Are Mikos, and Nuns Are Sexy, this is when nuns are portrayed according to the Rule of Funny.

This could be because "nun" is an Inherently Funny Word, or that their outfits look silly. This trope mostly manifests as "normal" things being made inherently funny due to nuns doing them. Someone boarding a plane? Normal. A nun doing it in her religious habit? Hilarious! Of course, the majority of modern nuns do not wear habits anymore, preferring plain black or grey dresses instead, but...that's not as funny. Also, the conventional stereotype of them is that they are very stern, severe and disapproving, thus making them either foils for wackiness going on around them or upping the humor value when they do something wacky.

Monks, The Vicar (or occasionally a priest of another stripe) can become this trope, especially if for some reason he's in full robes doing something improbable (even less likely, as vicars and priests haven't worn robes on day to day activities for hundreds of years. Many do still wear cassocks, though.) There's something about the way long billowy clothes move when the wearer is in action.

IE, nuns are The Comically Serious. The only thing more hilarious than nuns would be Batman in a nun's habit. (You're picturing it right now aren't you? No doubt you're laughing your ass off).

Yes, this is sometimes Truth in Television. Like all people, it depends on the nun.