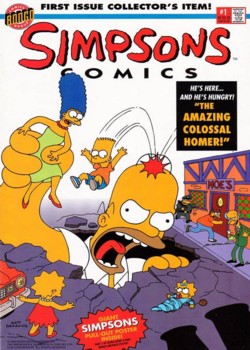 After its success in prime time TV, The Simpsons spawned into Comic Book territory with its own series based on the show. The comics were created by Bongo Comics, a publisher operated by show creator Matt Groening. Groening ran the Simpsons comic line without involvement from series executive producer James L. Brooks or any of the dozens of other producers, showrunners or writers that worked or are currently working on the television series.

There have also been several spin-offs such as Bart Simpson, Treehouse of Horror, and Radioactive Man.

The Simpsons provides examples of: