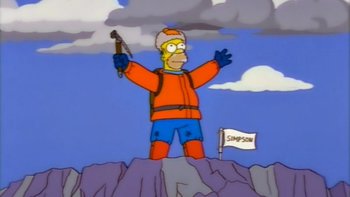 "BOW DOWN BEFORE ME, EVERYONE! FOR I AM YOUR KING!"
Advertisement:

With The Simpsons being the longest-running scripted primetime television series on television, you can expect a whole lot of awesome moments to be showcased in all its glory.