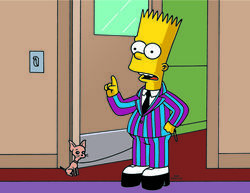 "Good news, gentlemen. I've grown that extra inch you wanted, plus several feet more."
A Hollywood studio decides to make a movie about the popular comic book superhero, Radioactive Man, in Springfield, with Milhouse being selected to portray RM's sidekick Fallout Boy. Things however hit a downward spiral rather quickly.

Bart and Milhouse are poring over the latest issues of Radioactive Man (as well as a knock-off comic) at the Android's Dungeon when Jeff Albertson (Comic Book Guy) lets them know that the character's about to go Hollywood with a big-budget movie adaptation starring Rainier Wolfcastle in the title role. Already the nerds of the online world (including the three nerds that Homer was friends with on season 5's "Homer Goes to College", the eccentric 1980s pop singer Prince and CBG himself) are scrounging up rumors about the production, with eyes and ears extending to the boardroom of the movie studio behind the project, who want to make a Radioactive Man movie that won't be like the campy 1970s TV version note (an episode of which included Paul Lynde as an effeminate scoutmaster villain, Radioactive Man and Fallout Boy fighting Boy Scout mooks, and everyone suddenly dancing to 1960s go-go music at the end). They need a location to shoot in, and decide on Springfield — based on its tiny, misspelled Variety ad, it's obviously a town that doesn't need to toot its own horn.
Advertisement:

Springfield's businesses jack up their prices in anticipation of the moneyed film crew, while the kids at Springfield Elementary are given new reason for excitement — auditions for the key role of sidekick Fallout Boy will be held at the school. At first, Bart appears to be a lock for the part, but he's slightly shorter than what the filmmakers want, and by the time he's managed to at least appear taller, they've decided to go with Milhouse instead.

Production commences. Homer allows the crew to use the Simpson house as a filmmaking location and gets to slack off with Teamsters, the city imposes taxes on wearing poofy director's trousers and another one on not wearing such pants as well as other silly regulations, horses are painted to look like cows, and Wolfcastle's elocution lessons prove to have limited success. But it's Bart who learns that Milhouse is miserable with the day-to-day grind of filmmaking. From there Milhouse literally runs away from the production, ruining the shooting of a key, one-take-only action sequence.

As the filmmakers attempt to salvage the production, Bart realizes Milhouse is hiding in the former's treehouse and tries to convince him to go back — as does Mickey Rooney, who's been sent by the studio to give him a pep talk on child stardom. Milhouse's decision is final, though. And while it would be logical to recast Bart as Fallout Boy, the filmmakers briefly attempt to go forward with Rooney instead. In the end, the matter proves moot; thanks to Springfield's gouging, the production has run out of money. The filmmakers return to Hollywood to regroup and are warmly welcomed by a town that treats people right.

The 70s Radioactive Man show of old was effectively the 60s Batman in all but name. There's sidekick catchphrases, overblown villains, a low-voiced, Adam West-like hero and hit flashes with silly onomatopoeia. And the music in the background even sounds like music from the 60s Batman.

The 70s Radioactive Man show of old was effectively the 60s Batman in all but name. There's sidekick catchphrases, overblown villains, a low-voiced, Adam West-like hero and hit flashes with silly onomatopoeia. And the music in the background even sounds like music from the 60s Batman.