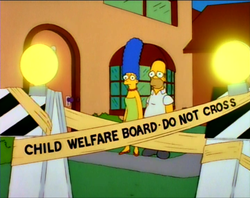 The Simpsons kids are unfairly taken out of their home by the local child welfare office due to a series of contrived coincidences that make it seem as if Homer and Marge are neglectful parents, such as;

This is the first episode featuring Bill Oakley and Josh Weinstein as showrunners; they took over the job from David Mirkin, the showrunner for seasons 5 and 6.