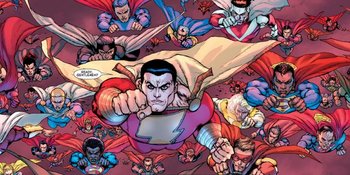 The Supermen of the multiverse.
"Wow, you know Lucius Sweet? He's exactly as rich and as famous as Don King, and he looks just like him too!"
— Homer Simpson, The Simpsons, "The Homer They Fall"

Often, a show uses an Expy to create an original take (or a legal shortcut) on a character, a company, a franchise, a person, or any entity. In many of them, they might exist as a Captain Ersatz of the original, or just to be an equivalent but original take on an entity. It is always implied that they are the replacement for that entity in that universe...but sometimes it turns out that last statement is not true. In other words, this is an aversion of the Celebrity Paradox, in-universe.

In this trope, an Expy lives alongside the original characters, and nothing is weird about that. If there is a gang of famous characters, he might be part of that gang in that show's universe. These are common in animated shows that straddle the line between cartoon and reality, such as Animaniacs and Drawn Together. They may often be said to be a fan, a friend, or a hated rival of the real person whom they are an Expy of.

Also, if this story takes place in our universe, and it is established that the Expy and the original both exist as fictional entities, that would raise the question as to why the creator has not sent a cease-and-desist letter, or sued them for everything they have.

Note: this trope does not apply when the character is NOT an Expy of a famous character, but hangs out with famous characters or people. For example, in The Critic, Jay Sherman is a famous TV film critic who is friends with other famous real-life critics, like Gene Siskel, Roger Ebert, Gene Shalit, Rex Reed, etc. But because Jay is not intended to be a direct take on any of them, this trope does not apply. Compare and contrast with Lawyer-Friendly Cameo, Celebrity Paradox and Mutually Fictional.