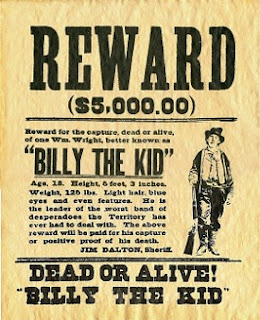 Cain: You want me?
RoboCop: Dead or alive.
Cain: One of us must die.
RoboCop: Dead, then.
— Robocop 2
Advertisement:

Posters hanging on every second wall, typically featuring some or all of the following:

A Truth in Television trope that is Older Than Feudalism, as such publications have existed before the printing press despite their common association with westerns. In modern settings, they're almost exclusively seen in post offices, as the FBI still uses these.

One common idea is for a character to see their own poster and do one of a few things:

Even more bonus points if, after seeing his own face on a Wanted poster, the outlaw stands next to the poster and adopts a pose exactly like the picture on the poster (deliberately or not).

For a Bounty Hunter otherwise, seeing a poster means he has a new game to chase for. They will often dramatically tear down the poster rather than leave it up.

Like the Face on a Milk Carton trope, it may also be Played for Laughs, such as having the creator of a show make a Creator Cameo in the wanted poster. Generally, this is not what a character wants to see when they're in a Fugitive Arc. These are to be expected for a character who is The Most Wanted.