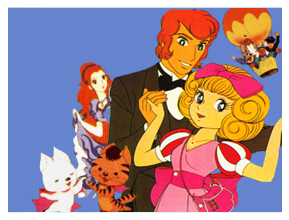 Honey Honey, or Honey Honey no Suteki na Bouken (lit. "Honey Honey's Wonderful Adventures"), first a 1966 manga series by Hideko Mizuno, Osamu Tezuka's assistant and one of the first successful female mangaka. Later it was made into a 29-episode anime series by Toei Animation for the Kokusai Eiga (MIC) company in 1981 and telecast on Fuji Television from October 1981 to May 1982.note It did not air in network time on the Fuji network, and ended up airing on Tokyo Broadcasting System or Nippon TV affiliated stations, or not at all, in some areas. In some cities, the series didn't air until 1984. The manga also got a re-release in 1981 to coincide with the premiere of the anime.

It has been distributed as: Honey e il gatto birbone (Italian); Honey Honey (Portuguese, Latin-American Spanish and English); Favo de Mel (Brazilian Portuguese); I fantastici viaggi di Fiorellino (Italian); Las Aventuras de Silvia (Spanish); Les Aventures de Pollen (French); Miodulinka (Polish); Pollen (French); and هني هني (Arabic). Unfortunately the story was cut short because of how poor the ratings were back in Japan, with the production company quickly moving on to Little Pollon (which proved more popular), but most of the manga's plot had been adapted, besides a few better subplots. And the series did become rather popular in Europe - two different dubs exist in Italy - and in Latin America, particularly Brazil. An English dub produced by a company called Modern Programs International was shown in the United States from 1984 to 1986 on CBN cable - initially only on Sunday mornings, then early mornings Monday through Friday - and a handful of episodes were also released on VHS, making it one of the earliest shojo anime series to reach the States. Even more remarkably, unlike other anime brought to the U.S. in that time period (and the decades since), the American broadcast was uncut and kept the original music (except for new original opening and ending songs) and SFX.

The story begins in Vienna, 1907 (sort of) with vain Princess Flora'snote Typically Romanized this way, although her name would actually be pronounced in Engrish as Florel nineteenth birthday celebration, where suitors from all over the world are gathered to try to get their hands on her vast fortune and her hand in marriage. The classy masked bandit named Phoenix crashes the party and declares brashly that Flora wouldn't be nearly as beautiful as she is without her ring. Shocked at Phoenix's brashness and fed up with her suitors' motivations, in a fit of rage, she tucks her priceless diamond ring, the "Smile/Star of the Amazonnote depending on the dub", into a cooked fish and chucks it out the window. A little white cat named Lilly eats the fish whole, swallowing the ring along with it. Flora then declares that she will marry whomever can retrieve the Smile of the Amazon and return it to her.

Lilly belongs to Honey, a young orphaned waitress who has owned her since she was a little girl and considers Lilly like a younger sister. Phoenix catches up to her and asks her for her cat, her closest companion, and Honey demands 100 million for her while running off in a hot air balloon along with Lilly. From then on, it's all about the wacky chase over all of Europe (and beyond), in a race to retrieve a missing ring, with even more surprises in store for the princess, suitors and Honey & company. These surprises range from encounters with more racial stereotypes, King Kong, the evil Slag, Vikings, and more...

Note that unlike most early shojo series, Honey Honey refuses to take itself seriously (except once or twice, towards the end, and that doesn't stick too much).

Not at all to be mistaken with Cutie Honeynote although Masaki Tsuji was the head writer on both shows and series director Takeshi Shirato worked on both as well, as did several others or Candy Candynote  although both Candy and Honey Honey share the same Japanese voice actress, the latter being a melodrama. Also no relation to the hit song by Abba.

The rights to the series are currently held by Enoki Films USA, although the series has had no American re-release since the mid-1980s. Some English dubbed episodes occasionally turn up online, though.