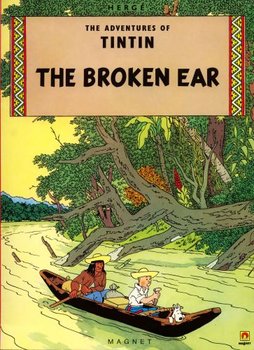 The Broken Ear begins with a bizarre robbery. A fetish created by the South American Arumbaya tribe is stolen from the Museum of Ethnography, only to be returned the following day - apparently stolen only as a prank. Tintin realises the 'returned' fetish is a fake and quickly discovers that a local sculptor who specialised in making primitive art has died under odd circumstances. Rightly believing the theft and the sculptor's death to be linked, Tintin begins his investigation.

Having had a run-in with the crooks Ramon and Alonso (also on the elusive trail of the real fetish) Tintin takes ship for the troubled South American republic of San Theodoros, where he ends up caught up in a revolution and the intrigues that follow. Ending up close to the Arumbayas' territory, he decides to visit them in the hope of finding out why the fetish was worth stealing. Unfortunately Ramon and Alonso are still after the fetish and are fully willing to kill to lay their hands on it.

The Broken Ear introduced General Alcazar, later an important recurring character and ally of Tintin. With San Theodoros (and its neighbour Nuevo-Rico) Hergé also created the first of his fictional countries and languages - in the original French edition the Arumbayas speak a language based on Marollien (a Flemish dialect spoken in the regio of Brussels) and in the English translation they are speaking phonetic Cockney English!

(Now look, Do you remember the brown idol? Tintin's lookin' for it. Can you help him?)

(The brown idol? Aye, aye! [It's] like I told you. The tribe give the brown idol to Walker. He was a nice guy. But his fellas took our precious jewel. And if the Arumbayas catch him, I'll have his guts for garters. No messing!)