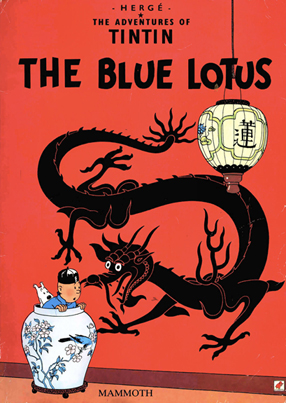 The Blue Lotus picks up right where Cigars of the Pharaoh left off, with Tintin still staying as a guest of the Maharajah of Gaipajama. The story begins when Tintin is visited by an unknown Chinese man wanting to discuss matters of great importance with him. However, the man is hit by a dart containing the madness serum from the previous issue and before losing his grip on reality only manages to tell Tintin that he must go to Shanghai and seek a man named Mitsuhirato.
Advertisement:

Once in Shanghai, Tintin quickly becomes involved in a struggle between another branch of the opium-smuggling operation from the previous book, led by Mitsuhirato, and a resistance movement called the Sons of the Dragon, led by the benevolent Wang Chen-Yee.

The Blue Lotus is notable for being the first issue for which Hergé actually did a degree of research, being aided by a Chinese art student named Zhang Chongren, with whom he formed a close friendship and based one of the characters in the story on. As such, it is generally considered the point at which the series fully grew its beard.