Recap / Tintin: Cigars of the Pharaoh 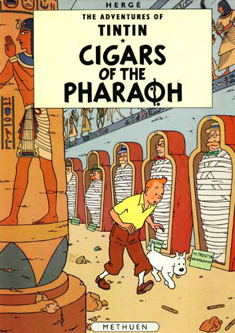 Cigars of the Pharaoh begins with Tintin and Snowy on a pleasure cruise in the Mediterranean Sea, where they agree to assist fellow passenger Professor Sophocles Sarcophagus (Philémon Siclone in the original French) in finding the lost tomb of the Pharaoh Kih-Oskh. Before they reach land, Tintin is framed for drug smuggling and needs to evade the detectives Thomson and Thompson. When Tintin and Sarcophacus locate the tomb, Sarcophagus disappears and Tintin discovers that the tomb itself is being used by an international drug smuggling operation to store boxes containing mysterious cigars bearing the mark of Kih-Oskh. After travelling around Arabia and then India, Tintin finds Sarcophagus, but discovers that he has been driven insane by a mysterious poison being used by the smugglers.
Advertisement:

Cigars of the Pharaoh marks the first appearance of regular characters Thomson and Thompson, who are noticeably less incompetent here than they would later become, as well as recurring characters Roberto Rastapopoulos, Captain Allan and Senhor Oliveira da Figueira.