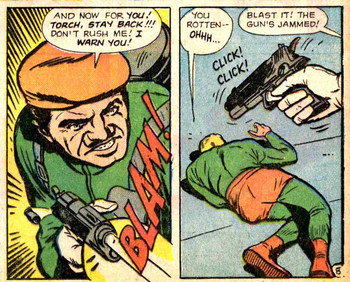 "Carbon fiber, .28 caliber. Made in China. If you want to kill a public servant, Mr. Maroni, I recommend you buy American."
— Harvey Dent, The Dark Knight
Advertisement:

Guns, like any machines, are prone to malfunctions; the most common, and thus the most likely to pop up in fiction, are jams and misfires. However, since there's no good reason for a gun to jam in the middle of a straightforward firefight, expect any errors to come during a crucial moment.

You can also think of it this way: does this gunshot have the power to end the plotline? If yes, and if the plot isn't at its actual end, it's fairly likely that it won't go off quite right.

Of course, when real guns jam or misfire, it's fairly easy to fix (depending on the gun and the era, of course). That said, if it comes down to timing, a misfire or jam may make or break a gunfight. It's also much more common in period pieces, as modern weapons are much more reliable than, say, 19th century revolvers.

May overlap with Reliably Unreliable Guns. Similar to My Car Hates Me.

While the title of this trope is misfire-specific, do note that it applies to any type of failure to work on the gun's part.