A Way Out of a Cave-In 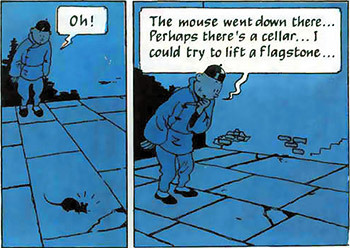 The main characters are trapped in a freshly-collapsed cave or building. All seems lost and they are ready to give up, when suddenly the hint comes — an indication that there are possible exits, and that savvy characters must pick up on them if they are to escape their location.

Not limited to cave-ins, this may also apply when the party is trapped in a sealed dungeon or cell, behind a locked security or blast door, deep in a maze, or some other location from which there seems to be no escape.

Variations of this trope include the trapped characters noticing a draft or air movement indicating a possible Air-Vent Passageway, or finding a place where dripping water or a faint light source enters the dungeon through the tiniest crack. This frequently overlaps with Follow the White Rabbit as well, with another common clue being an animal (wild or tame) suddenly showing up out of nowhere. The animal yelps and disappears, the characters wonder where said animal came from and, eventually, how it got in, then realize that they can follow it out to freedom. Said creature may be a Tunnel King or some other form of local wildlife, but this may also be a way of introducing the Team Pet, or at least of allowing the pet to make itself useful.

May result in an Involuntary Group Split. Contrast Buried Alive, for when there's no way out. See also Foreboding Fleeing Flock.