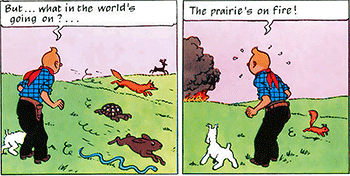 Most animals have much better senses than humans, and as such they are better at detecting an approaching danger and responding appropriately. One good sign of impending trouble is a swarm of animals fleeing away from it, especially if they're predators fleeing past or even with their prey. Often people find themselves in front of said fleeing swarm without realizing the reason they're fleeing. Alternatively, they take it as a sign they're getting close to the source of the trouble if they're intentionally investigating it.

Always a Bigger Fish is a possible cause for this. See also Evil-Detecting Dog, Portent of Doom, Bat Scare, Canary in a Coal Mine, Disturbed Doves, A Storm Is Coming, Scared of What's Behind You, Invading Refugees, and Follow the Chaos. Compare Don't Ask, Just Run. If the animals or birds have already left the area before the protagonists arrive, see It's Quiet… Too Quiet. If particularly dangerous and aggressive animals flee and ignore everything else, see Why Isn't It Attacking?.