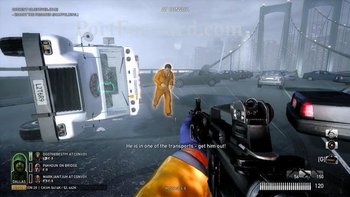 In crime movies, thrillers, or TV shows about police, any time a convoy transporting a prisoner or a group of prisoners is shown, it will almost always be ambushed by a criminal gang. Sometimes, a convoy may even be sent out to draw out the attackers. The vehicle may be a police van, bus, or armored car. The security escort is often police cars or large SUVs.

Occasionally, a convoy may not even need to be attacked. Something can go awry during the trip, especially if it involves prisoners, such as a snowstorm or traffic accident, and the transports never make it to the jail. The prisoners take advantage of the problem to escape.

This can be prevented with a Decoy Convoy (or two, or three, or...), by increasing the size of convoy's security escort, or using a heavily-armed SWAT unit.

For video games, this trope only applies if the player attacks a convoy. If the player is tasked with defending one, it's an Escort Mission. Compare and contrast Armed Blag, where the target convoy is transporting money rather than a prisoner.