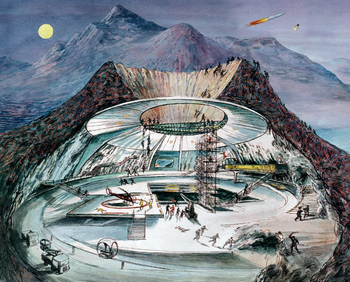 The base no self-respecting supervillain can do without.
Mr. Incredible: I've been meaning to ask you. Of all places to settle down, why...
Mirage: With a volcano? My employer is attracted to power. So am I. It's a...weakness we share.
Mr. Incredible: Seems a little unstable.
Mirage: I prefer to think of it as...misunderstood.
— The Incredibles
Advertisement:

Some people want to live not at volcano's feet, but in a volcano. Whether it's active or extinct. After all, a crater inside some big mountain is a relatively defensible location, there's plenty of free geothermal power, it looks impressive, and Everything's Cooler With Lava. Usually Supervillain Lair, but not always. Naturally predisposed to become a Collapsing Lair.

Most feature labyrinthine cave complex, Lava Pits and use of free heat. Often done in a rather careless manner. May or may not be located on an island. In a video game, becomes Lethal Lava Land.

King Olly moves Peach's Castle which he is using as a base on top of a volcano.

King Olly moves Peach's Castle which he is using as a base on top of a volcano.