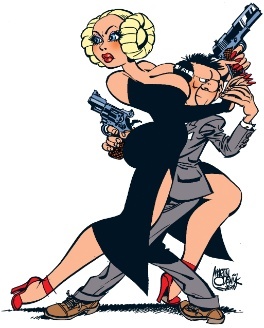 Agent 327 is a Dutch comic book series that started out as a spoof of James Bond, hence the title, but gradually became something completely different. The stories are written and drawn by Martin Lodewijk (°1939) and center around Hendrik IJzerbroot, a spy working for the Dutch government. He is often sent to a mission by his chef, "The Chef", and accompanied by the tall, big breasted Femme Fatale Spy Olga Lawina.

Agent 327 is notable for the clever stories, extensive background research and exquisite art work. The early albums were mostly child oriented stories and ran from 1967 until 1983. In 2000 Lodewijk rebooted his old series and started new production. Since then several new albums have been published. This new incarnation differs considerably from the older albums with more adult comedy and references.

An animated adaptation named Agent 327: Operation Barbershop is being developed by the Blender Foundation, and a teaser can be viewed here