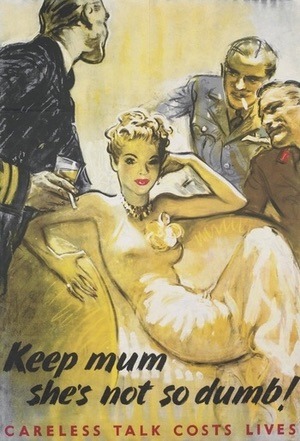 "See that ambassador over there? I'll sleep with him tonight, and the next morning, he'll tell me all his secrets."
"And if he won't tell them?"
"Well, at least I'll get laid."
— Folklore
Advertisement:

Espionage has long been depicted as a glamorous and exciting profession. The same depiction goes for its practitioners. Among this image is the concept of a beautiful and irresistible young woman charming male officers into revealing military secrets with her feminine wiles.

To qualify as this trope, the character must be a young attractive woman who uses her "charms" (sexual, emotional manipulation, or both) to work in a capacity for espionage specifically under a guise of innocence. She can be a member of La Résistance or The Empire, be idealistic, motivated by revenge, or Only in It for the Money and personal gain, as long as it's an attractive female spy, it fits this trope. This trope however does not apply to women who are merely secret agents. There must clearly be incidences of fraternizing with the enemy as The Mole.

The biological basis for this trope is quite sound: orgasm tends to shut off the cerebral cortex, which is responsible for, among other things, controlling behavior and impulses, and even simple kissing releases oxytocin, which is known to make people more trusting. Lack of self-control + misplaced trust = Loose Lips. However, this trope is rarely Truth in Television.

Despite its popularity in media, this trope is not usually Truth in Television for the reason that most political and military leaders know better than to blab state secrets to women they get to know in private company. Much more common is the case where a weak-willed political leader will reveal secrets to an ordinary prostitute who will then reveal it to the press or others, fulfilling the trope retroactively.

Finally, one doesn't need to actually get the target to reveal secrets directly; photographs or other embarrassing evidence of the encounter can be used to blackmail the target into giving you what you want (the classic Honey Trap).

Spies Are Lecherous may serve as an example of a gender-inversion of this trope.

See also Gentleman Thief, Classy Cat-Burglar, Honey Trap, Femme Fatale, The Vamp and Spy Catsuit. Can be averted via The Schlub Pub Seduction Deduction. Can lead to a When Harry Met Svetlana plot.