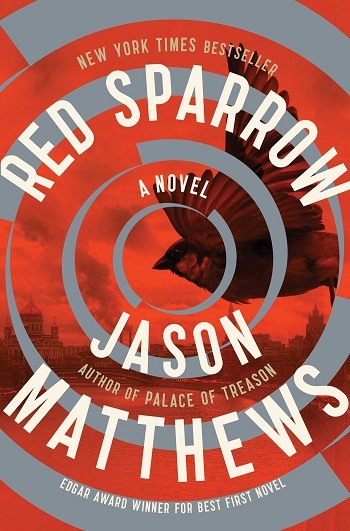 "Russia certainly did not lose the Cold War... It never ended."
Advertisement:

Red Sparrow is an espionage thriller novel written by ex-CIA officer Jason Matthews. The novel was published in 2013, and was followed by a sequel, titled Palace of Treason, in 2015. A third book, The Kremlin's Candidate, was released in 2018, concluding the trilogy.

In today's Russia, dominated by Prime Minister Vladimir Putin, state intelligence officer Dominika Egorova struggles to survive in the cast-iron bureaucracy of post-Soviet intelligence. Drafted against her will to become a "Sparrow," a trained seductress in the service, Dominika is assigned to operate against Nathaniel Nash, a first-tour CIA officer who handles the CIA's most sensitive penetration of Russian intelligence. The two young intelligence officers, trained in their respective spy schools, collide in a charged atmosphere of tradecraft, deception, and inevitably, a forbidden spiral of carnal attraction that threatens their careers and the security of America's valuable mole in Moscow. Seeking revenge against her soulless masters, Dominika begins a fatal double life, recruited by the CIA to ferret out a high-level traitor in Washington; hunt down a Russian illegal buried deep in the U.S. military and, against all odds, to return to Moscow as the new-generation penetration of Putin's intelligence service.

A film adaptation of Red Sparrow was released in 2018 starring Jennifer Lawrence as Dominika Egorova, to be followed by the release of the last book in the trilogy. The first trailer can be viewed here

, and the official trailer here