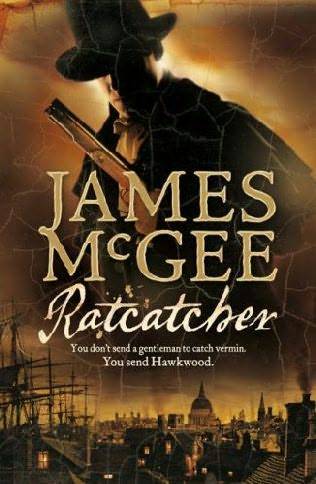 "You don't send a gentleman to catch vermin. You send Hawkwood."
Advertisement:

Matthew Hawkwood is the hero of a series of historical mystery novels by James McGee.

The Hawkwood novels historical novels are set during the Regency period, when Britain was at war with Napoleon. The hero, Matthew Hawkwood, is working as a Bow Street Runner, an early investigative officer working out of London's Bow Street Magistrates' Court. He is called upon to solve a number of civil crimes, including murder, body-snatching and highway robbery, but his previous military experience makes him ably suited to investigate issues of national security.

Hawkwood has a complicated back-story, which is touched upon at various stages of the novels. He once served as an officer in the 95th Rifles, but was cashiered after he killed a fellow officer in a duel. With Wellington's intervention he was spared a court-martial, and instead joined the Spanish Guerrilleros, liaising with the British intelligence officer Colquhoun Grant. It is Grant's influence that enables Hawkwood to get a job at Bow Street on his return to England.

McGee's creation of Hawkwood's past was deliberate, as he wanted a hero who was "at home in both the military and criminal worlds".

Much of the action within the novels is inspired by historical events. The plot of Ratcatcher centres around the secret development of the first submarines by American Robert Fulton, then working for the French. Resurrectionist is darker, reflecting the underworld of "resurrectionists" who stole bodies to supply the anatomy schools of London, and the experimentation of early (and illegal) organ transplant and resuscitation. Rapscallion focuses on French prisoners-of-war upon the prison hulks. Rebellion sees Hawkwood assigned to the Alien Office, the forerunner of Britain's Secret Intelligence Service. He is dispatched to Paris to liaise with a cadre of renegade French generals who are attempting to overthrow Napoleon Bonaparte. The plot is centred on the attempted coup, which became known as the Malet Conspiracy.

The novels in the Hawkwood series (so far) are:

The Hawkwood novels contain examples of: