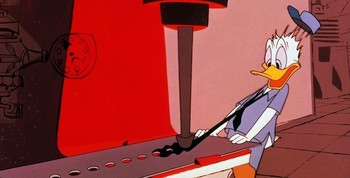 Talk about getting caught up in your work...
Advertisement:

Clothing can be functional or ornamental. It can be distinctive, dramatic, or symbolic.

It can also kill you.

Killer Outfit is when a character dies as a direct result of the clothing they wear. Note that the clothing must be directly responsible (if an inanimate object can be described as responsible) for the death. If Bob is shot because he's disguised as one of the Big Bad's henchmen, that would be Mistaken Identity. If Bob dons the disguise, catches the hem of his longcoat in his spurs, and breaks his neck in the resulting fall, that's Killer Outfit.

Cape Snag is a specific subtrope. Any examples with capes/cloaks should go on that page, not this one.

Compare Fashion Hurts and Clothing Combat. Depending on the situation, the wearer might avoid death by Giving Them the Strip. This trope can overlap with Hoist by His Own Petard if the clothing was intended to protect the wearer.

This is a death trope — expect spoilers!