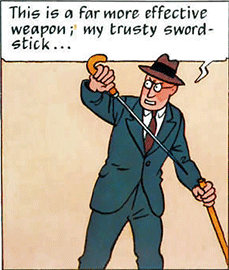 "He had thrown those thoughts as far to the side of his mind as he could manage, because holy shit sword-cane. Swooooooooooooooord-caaaaaaaaaaaaane!"
— About Jeremy Franco, The Only Way Is Up,

Survival of the Fittest
Advertisement:

A Sword Cane is a short sword or other bladed weapon that is concealed inside a cane. The cane is opened by twisting the top or pressing a release button, then pulling on the handle to reveal a blade, often with a "Tzing" sound. This weapon is typically used by Cultured Badass characters, or as a weapon of advantage by a character who has a disability (or pretends to). It is also sometimes used by villains, in which case its nature as a concealed weapon will be played up to indicate the character's sneaky and treacherous nature. Sometimes it is a switchblade opening from the tip of a cane to make it a Blade on a Stick. Also popular amongst blind swordsmen. Occasionally, this will be altered by the character, having a gun or stun baton disguised as a cane, which are also real weapons (and arguably more practical), but relatively rare in fiction.

Truth in Television: The Swordstick

was a popular gentleman's accessory in 18th and 19th century Europe. There were also examples of ladies parasols or walking sticks having blades concealed inside them, as although openly carrying a sword was no longer acceptable for a gentleman unless he was in military uniform, it was even less acceptable for a lady to openly carry a sword, or to officially let it be known that she knew how to use one.

Other examples throughout the world include the Japanese shikomizue (often associated with Ninja) and the Indian gupti, and archeological examples have been discovered dating back to ancient Rome and Egypt.

Connected to, and sometimes overlaps with, Parasol of Pain. Compare Combat Haircomb. If the cane doesn't need to conceal a blade for the character to do damage with it, see Cane Fu.

Sword Cane is a Sub-Trope of Arsenal Attire and sister trope of the non-violent Classy Cane.

Gideon's first weapon of choice is his cane.

Gideon's first weapon of choice is his cane.