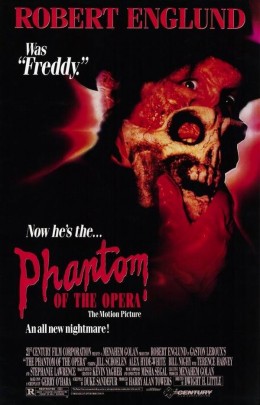 One, two, Phantom's coming for you...
"Only love and music are forever."
— Erik Destler
Advertisement:

A 1989 adaptation of The Phantom of the Opera, starring Robert Englund and Jill Schoelen, and directed by Dwight H. Little note (Halloween 4: The Return of Michael Myers, Marked for Death, Tekken and Free Willy 2: The Adventure Home).

In modern New York, an aspiring singer named Christine Day comes across sheets from an obscure opera Don Juan Triumphant. She uses it as a part of a theatre audition, which unexpectly sends her back in time to Victorian London to relive the events around the man who wrote the work: Erik Destler, a notorious psychotic killer known as "The Phantom".