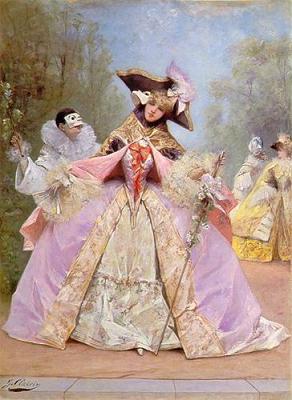 Paper faces on parade...
"Green and black,
Queen and priest,
Trace of rouge,
Face of beast,
Faces -
Take your turn, take a ride
on the merry-go-round
in an inhuman race!"
— The Phantom of the Opera, "Masquerade"
Advertisement:

Want to show off just how rich, elite, and extravagant your upper class is? Have them celebrate everything with a Masquerade Ball. With bizarre masks and elaborate Gorgeous Period Dress, everyone's identity is sufficiently obscured for any number of misunderstandings. Either Horror or Hilarity Ensues.

For really grand scale masquerades, the writers may include festivities where the entire city dresses up in grand costumes, a la Carnival/Mardi Gras. Which maximizes the chance for confusion and mingling with people one would normally never know. Hard to avoid in New Orleans and Venice.

A popular 19th century setting, due to, as The Other Wiki puts it, "both to their popularity at the time and to their endless supply of plot devices." To wit: Mistaken identities, untraceable murderers, believing something is All Part of the Show, a normally-costumed character hiding in plain sight, (or mocked for their poor quality costume) and one of the attendees' masks being revealed to be their actual face. A court is a... difficult place.

The refinery on top of the sheer trope goldmine that is the Masquerade Ball is the convention of using aliases to go with the masks. Historically, that can free participants to indulge in era-appropriate 'scandalous' behaviors — and also make a good opportunity for the uninvited to crash. Watch out for the mass robbery by the Phantom Thief and Classy Cat-Burglar, and hope there's a Golden Age Super Hero around somewhere. Charity Ball often combines with the theft, to give the thieves a good way to infiltrate.

A modern costume party has some of the potential for this, especially if there are disguises abounding. If it's an actual Masquerade Ball in a modern setting, expect at least one guest to bring out the Romeo and Juliet quotes. If Fanservice is desired, the modern costume party has a great advantage: Whereas the nineteenth century believed in modesty, the twenty-first century is a time in which you can expect plenty of Sexy Whatever Outfits.

Even those who vainly deny that Everyone Is Jesus in Purgatory may grudgingly admit the social metaphor inherent in the Masquerade Ball.

A Sub-Trope of Dances and Balls and a period-specific Sub Trope of Themed Party.

Has nothing to do with the Masquerade (and can actually mean a break from it, such as For Halloween, I Am Going as Myself).