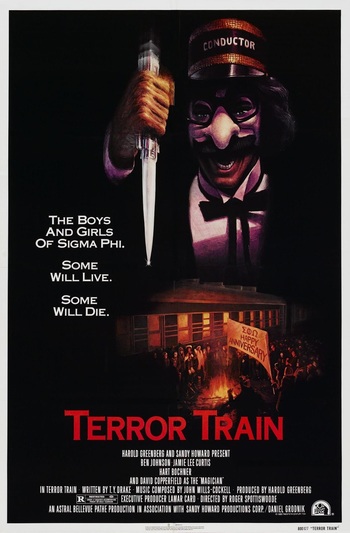 By the end of the line, several people will have their tickets punched.
Advertisement:

Would you like to board a train which celebrates New Year's Eve all through the night while it is reaching its destination? It has plenty of cool costumes, food, mind-altering substances and loose women! You could say it is the very definition of Cool Train!

Now that you're onboard, you should also know that there's also a disgruntled killer, who was a victim of a nasty prank three years ago among the guests. Have fun!

And that's how the plot goes for this 1980 Slasher Movie directed by Roger Spottiswoodenote (who also did Tomorrow Never Dies and The 6th Day) and starring Jamie Lee Curtis, Ben Johnson and the aforementioned David Copperfield.

Terror Train will be stopping in: