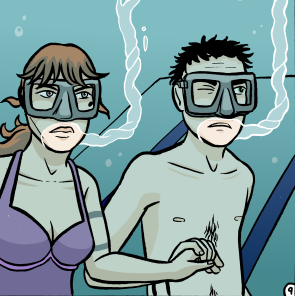 Who needs snorkels, anyway?
Andrew: Obviously the first thing I did was panic. What was it? Burglars? Murderers? — Then I remembered I was already dead.

is an episodic webcomic by Lucy Lyall (the artist behind Kaspall) relating various incidents in the lives of two local specialists in the magical, supernatural, and simply strange, Toby Hathaway and Marion Sark.