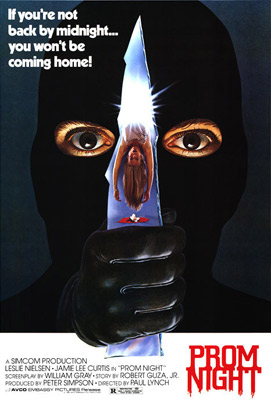 "The killer is coming!"
Advertisement:

Released in 1980, Prom Night opens with an unfortunate death of a child, caused by a group of kids playing a variation of hide-and-seek in an abandoned building teasing a girl, leading her to fall from a window. The kids never told anyone what happened and the little girl's death was blamed on Leonard Murch, a psychopathic sex fiend who is caught shortly after.

Several years later, students of Hamilton High are preparing for prom. But unbeknownst to them, a masked killer looking for revenge has invited himself to it.

The film features Jamie Lee Curtis and Leslie Nielsen in starring roles, and has since become a cult classic, especially among slasher fans, even inspiring some elements of Scream (1996). It is also remembered for its disco soundtrack, which is sought out by collectors. It was also popular enough to receive three In Name Only sequels; Hello Mary Lou: Prom Night II (1987), Prom Night III: The Last Kiss (1990) and Prom Night IV: Deliver Us From Evil (1992). A loose remake was also released in 2008.