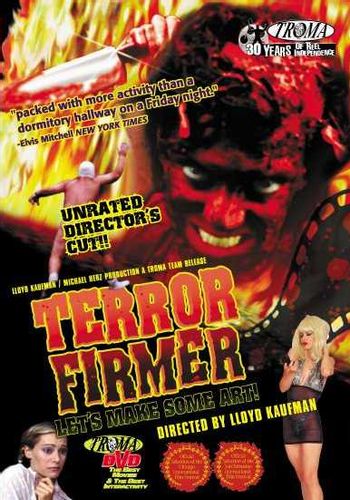 Family values must be saved!!!
"Look! I am the director! I've been directing ten-cent movies for thirty years! And I think I know a little bit about what I'm doing! It's a horrible world! There's starvation! Dismemberment! Torture! Rape! Corn-holing! It's horrible out there! But it's worse—It's worse here on the movie set! Much worse! We have danger! And stupidity! I don't want somebody dying on my set! If someone dies here, I'll blow my brains out, and it'll be your fault! My career will be over! IT'LL BE YOUR FAULT!!! Now where are them big-titted women at?"
— Larry Benjamin, the trailer
Advertisement:

The set of Troma's latest B-grade masterpiece is being terrorized by a sick serial killer. Who is this mysterious woman who's knocking off crew-members left and right? The answer will shock you! Or at least sicken you.