Film / Terror from Beneath the Earth 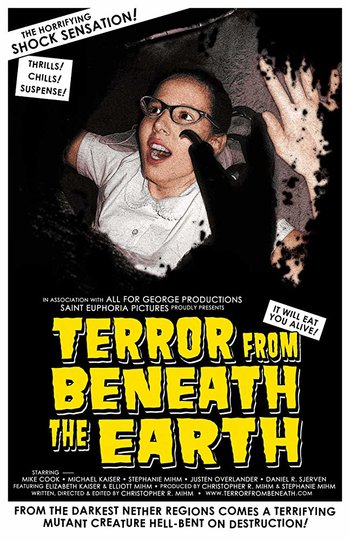 Terror from Beneath the Earth is the fourth film by Christopher R. Mihm and the fourth film in the Mihmiverse Shared Universe. It is notable for introducing the recurring characters of Dr. Vincent Edwards, Rosemary Bennett (later Rosemary Johnson), Deputy Hayes and Danny Johnson.

Local children Danny and Alice Johnson disappear in the local Wisawa cave system, shortly after the caves are determined to be hopelessly irradiated thanks to underground nuclear bomb testing. Thankfully, Alice's schoolbooks are discovered by visiting British scientist Dr. Vincent Edwards and his assistant/niece Rosemary Bennett while they are spelunking. The two report their findings to Sheriff Elliot, as he is taking a statement from Stan Johnson regarding his missing kids.

The four go off to explore the caves together, but Rosemary is quickly overwhelmed by a bat swarm and abducted by a giant bat creature with a paralyzing touch. Stan runs off to rescue his children and Rosemary, as Dr. Edwards and Sheriff Elliot return to The Sheriff's Office so Dr. Edwards can call a colleague and get the sonic device he thinks might stop The Creature.