Film / Attack of the Moon Zombies 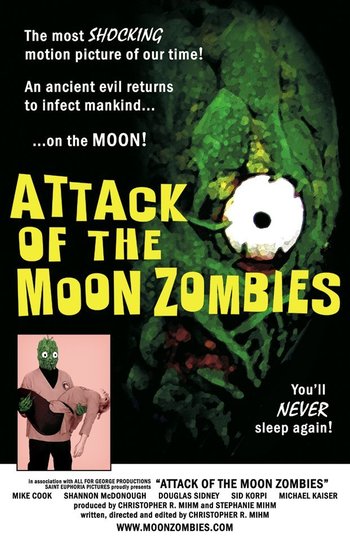 Attack of the Moon Zombies is the sixth film by Christopher R. Mihm and the sixth film in the Mihmiverse Shared Universe. The film continues the story of Dr. Vincent Edwards from Terror from Beneath the Earth.

Set twenty years after Dr. Edwards' encounter with a bat-like creature in the radioactive cave system near Phantom Lake, Wisconsin, Dr. Edwards is preparing to start training his successor, Glen Hayes, at the Jackson Lunar Base in preparation for his retirement in one week. In the midst of this, he makes a remarkable discovery - a strange plant inside a cave on the lunar surface, which is the first evidence of alien life.

Unfortunately, the plant's spores prove decidedly toxic and the plant kills Glen Hayes after spraying him with spores. Worse yet, the spore's curious properties animate the bodies of those who are killed by them, causing them to continue spreading the spores as they infect more and more hosts. It will fall to Dr. Edwards and his colleagues to save the world from the so-called moon zombies before they find a way to get to Earth.