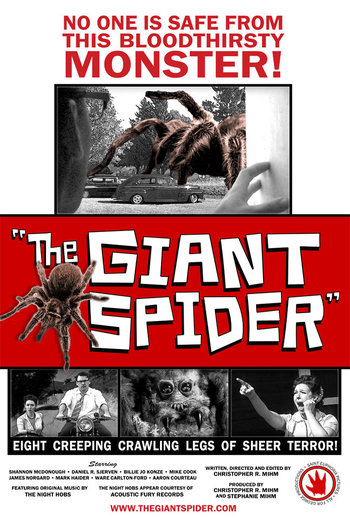 The Giant Spider is the eighth film by Christopher R. Mihm and the eighth film in the Mihmiverse Shared Universe. It has been referred to as "The Avengers of the Mihmiverse" for how it unites the heroes from several earlier films to deal with a new menace - in this case, the titular giant spider.

Set after the events of Terror from Beneath the Earth, the movie opens with Danny Johnson playing in the woods, where he spots the giant spider. He reports this to his stepmother, Rosemary, who contacts the authorities. This brings in Dr. Edwards and Dr. Gabriel from Attack of the Moon Zombies, along with their associate Dr. Hackett, who act as scientific advisers to General Castle from House of Ghosts.

Naturally, it falls to SCIENCE! to save the day when the might of the American military proves less than effective. Thankfully, Intrepid Reporter Howard Johnson is on hand to help the scientists put their plan into action when General Castle proves less than receptive to a solution that doesn't involve dropping a nuke on the giant spider.