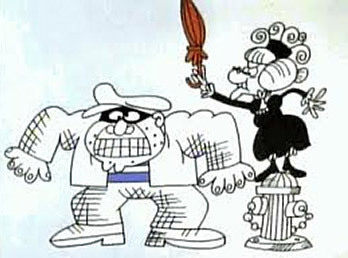 When you find yourself in danger,
then you're threatening a stranger...
Chief: [takes his coat off] I've been waiting for this since Nixon!
Vice-President: I got a new pacemaker, I can go all day!
— Get Smart
Advertisement:

An elderly person attacks someone or something, from a teenager to a monster, often with an object like a cane or a purse. Effectiveness of attack varies from annoying and harmless to actually taking down the target. A typical justification for this is that they're a Retired Badass.

See also: Never Mess with Granny, Evil Old Folks, Old Master, Screw Politeness, I'm a Senior!, Improbable Weapon User. Not to be confused with Racist Grandma, though it can overlap. Someone who fights back, or worse throws the first punch, Would Harm a Senior.

Also not to be confused with When Alders Attack. (Sorry.)