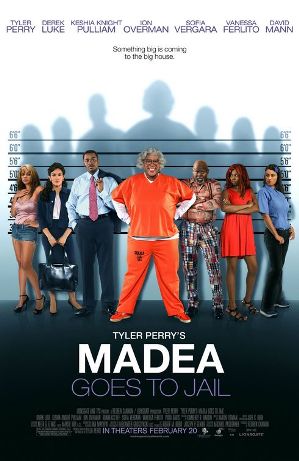 Madea Goes to Jail is a 2009 film by Tyler Perry reprising his role as Madea, the don't-mess-with-me matriarch who finds herself in jail after one too many entanglements with the law. Meanwhile, in the B-plot to the movie, a prostitute named Candace (Keshia Knight Pulliam) fatefully encounters Josh (Derek Luke), her best friend from college who now works as an assistant district attorney. Sympathizing with her plight, Josh endears himself to get to the bottom of how she ended up on the streets in an effort to relieve his guilt about his success. As the details unfold, The Reveal leads Candice back to the man truly meant for her and helps to get her off of the streets. With the help of her friend Donna (Vanessa Ferlitto), and Helen (Viola Davis), a serious Determinator of the Church, justice is eventually done.

Tropes for Madea Goes to Jail:

Joe shows how loyal he is to family when sister Madea is apprehended by the police, Joe himself still in the car with her

Joe shows how loyal he is to family when sister Madea is apprehended by the police, Joe himself still in the car with her