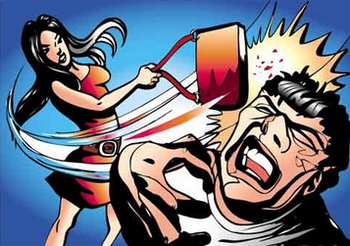 The use of a purse or a briefcase/suitcase as an Improvised Weapon. The former may be related to When Elders Attack, while the latter to Briefcase Blaster.

Sometimes, handbags may contain heavy objects, like anvils, to add more power to the attack, especially in cartoons.

Often occurs in the Cat Fight and Wimp Fight. (Little note - fights in football in Britain are often mere slap fights, and the commentators occasionally describe such a fight as "handbags", a shortened version of Handbags At Dawn.) One reason people should Never Mess with Granny.