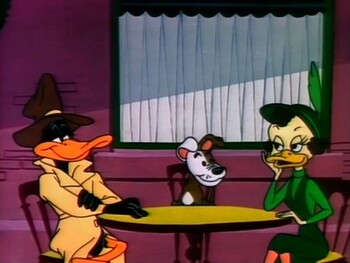 In this parody of Boston Blackie, Daffy plays Boston Quackie (Friend to those who need no friends, enemy to those who have no enemies). While vacationing in Paris with his girlfriend Mary, Quackie is approached by Inspector Faraway (Porky) who assigns him to deliver a top secret briefcase to a consulate in West Slobovia. However, the briefcase is immediately stolen by the Man in the Green Hat, requiring Quackie to give chase that leads to a spy-filled train.

This is one of a handful of 1950's cartoons where, when aired in syndication, the concentric circles opening/closing have been butchered. The opening, in such prints, has the correct circles but plays the 1946-1955 Looney Tunes theme, while the closing correctly has the 1955-1964 closing theme but the Merrie Melodies concentric circles.