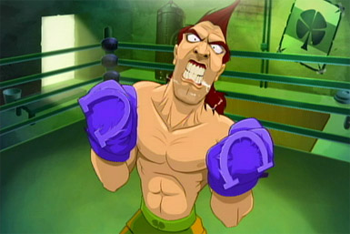 It is a stock cheat in boxing for one to conceal something hard and heavy in one's glove. Classically done with a horseshoe.

A character employing this tactic in non-professional contexts is probably a Combat Pragmatist.

Interestingly, the point of a boxing glove is not to dampen the blow, it's to protect the hand. Hiding a horseshoe (or similarly hard things) in your boxing glove would be just as likely to damage your fingers as your opponent's face. This simply makes it an Acceptable Break from Reality.

Compare Power Fist; Power Fists may be used in straight fights as much as it is for cheating. Enhanced Punch in general is a less mundane form of this. Compare also Tricked-Out Gloves for gloves that are used for more than just punching. Handbag of Hurt and Sock It to Them also commonly go with a similar principle: something heavy is put inside the handbag/sock so it can pack hard hit.