You Don't Want to Catch This 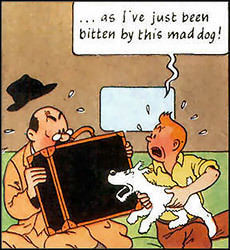 This trope is for when a disease is used as a deterrent, preying on the fears of those being tricked in order to escape capture. The idea behind it is taking advantage of other people's survival instincts.

You've finally infiltrated a city or stronghold. You're looking around wondering what to do next when suddenly you hear a voice telling you to stop. It appears a guard or other equivalent Mook has just happened to pass by and catch you. You're suspicious as it is, but if he looks more closely, he'll realize you're an enemy of the state or you have some incriminating evidence on you that you don't want him to find. What do you do?

Fake a disease, of course. It doesn't even have to be a real disease, as long as it sounds appropriately scary. Gorapoxacephalitis will work just fine, then start shambling around, act disconnected from the world, and mention it's contagious, the guard will go running in the other direction leaving you alone. In fact, you get bonus points if you made up the disease on the spot and it came entirely from your imagination. Extra bonus points if the guard mentions that he's heard of the disease before.

There's also a version where a character is in danger of being raped, and she deceives the rapist into thinking she has an STD, so that if the ruse is successful, the rapist loses interest. In a less dramatic version, a woman could turn down a man's pick-up lines by claiming to have a disease.

It's possible that this trope is more common in parody, where the disease used is so obviously not a real disease, it's funny that the guard falls for it.