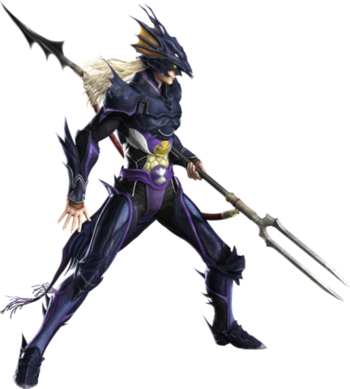 Know the skies' true fury!
"The Dragon Slyrak sleeps within this armor, and the knight within the Dragon waits. Beware you do not wake them both."
—Sir Davion, Dota 2
Advertisement:

Everyone knows the classic tale of the Knight in Shining Armor and his quest to slay a dragon, often to rescue a princess from the dragon's clutches, or to claim the dragon's hoard. So what do you get when the dragon and the knight are one and the same? You get the Dragon Knight.

They may even be an actual dragon, though they're often shapeshifted into a humanoid form.

In any case, a Dragon Knight character is an easy way to add a touch of awesomeness to your story; dragons are cool, so it stands to reason that a Dragon Knight would be even more so.

Compare Monster Knight and Armored Dragons. Contrast Dragons Versus Knights. Dragon Riders, Dragon Tamers (If fighting's part of the job description), and (ironically) The Dragonslayer are almost always examples. They're usually a Magic Knight as well, and are another way Our Dragons Are Different.