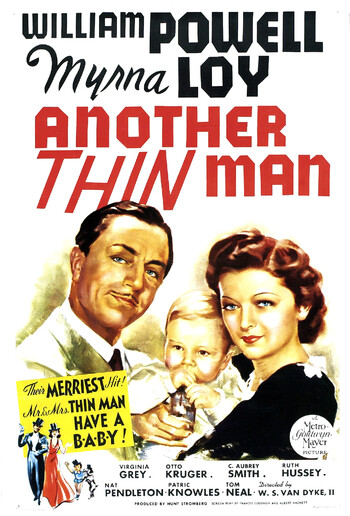 Another Thin Man is a 1939 mystery film directed by W. S. Van Dyke II. It is the third of six films in the "Thin Man" series that started with The Thin Man in 1934.

In this one, Nick and Nora Charles (William Powell and Myrna Loy) have returned to New York City with their infant son Nick Jr., whereupon they are summoned out to Long Island to meet with Col. MacFay, a stuffy old Brit (played by C. Aubrey Smith, patron saint of Hollywood's stuffy old Brits), who has been managing Nora's business interests. MacFay has become convinced that Phil Church, formerly an employee of his that went to prison for shady business dealings, is out to get him. His daughter Lois (Virginia Grey) is terrified for her father. Sure enough, the Colonel is murdered while Nick and Nora are staying at his mansion, and Nick Charles is drawn against his will into another murder mystery.

Powell's return to movie-making after nearly dying from colon cancer, this was the eighth of fourteen films he and Loy appeared in together.

Followed by Shadow of the Thin Man.