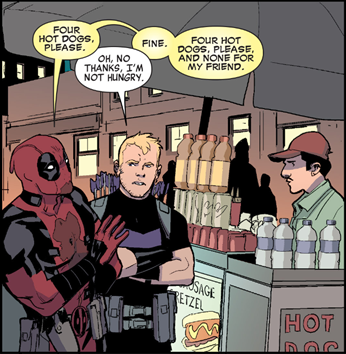 A stock joke playing on the Ambiguous Syntax that results when two people are present and one places the food order. Runs in two types:

While mainly just a quick gag, this trope also gets the point across that Alice or Bob is a Big Eater, or that one of them just wants to drown his sorrows in alcohol that much faster.

In some contexts, the speaker might lack familiarity with the restaurant's cuisine and thus not be aware that their friend ordered enough for both: "Oh, I guess I'll have a 'larjj-peetsa'note large pizza too."

Compare Cut a Slice, Take the Rest and Ate It All.

This happens after they each already had a couple of "two beers" a few minutes ago. Eventually, Werner and Andi will have eight empty beer bottles and eight empty shot glasses on their table.

Since Megan knows that Wally has a hyper-accelerated metabolism, she probably should have anticipated this.