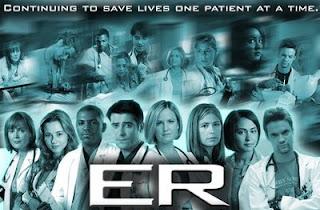 "You set the tone."
— From Dr. Morgenstern to Mark, Mark to Carter, and Carter to Morris.
Advertisement:

Long-running Medical Drama that redefined the genre. It was the first to show graphically realistic emergency procedures and reproduce the disorganised clutter of a real metropolitan hospital. Its creator, Michael Crichton, based many of Season 1's stories on real patients he'd had during his time as a doctor, though he handed the reins to John Wells starting in Season 2 and had little involvement with the show from then on.

Set in Cook County General Hospital, the show followed an ever-changing, ethnically diverse cast of doctors, nurses, administrators and medical students as they deal with the day-to-day angst of saving lives. Their personal lives took a back seat to taut scenes of trying to help patients with their various physical and emotional emergencies. The main character arc was that of John Carter (Noah Wyle), who evolved throughout the course of the show from an uncertain medical student to the wise and infinitely capable chief resident.

Due to its long run (15 seasons) it had Loads and Loads of Characters. The original cast consisted of Anthony Edwards, George Clooney, Sherry Stringfield, Noah Wyle, Julianna Margulies, and Eriq La Salle, with Gloria Reuben and Laura Innes joining them as regulars in Seasons 2 and 3, respectively.

Not to be confused with the 1984 sitcom E/R, which also took place in a Chicago hospital and also featured George Clooney.