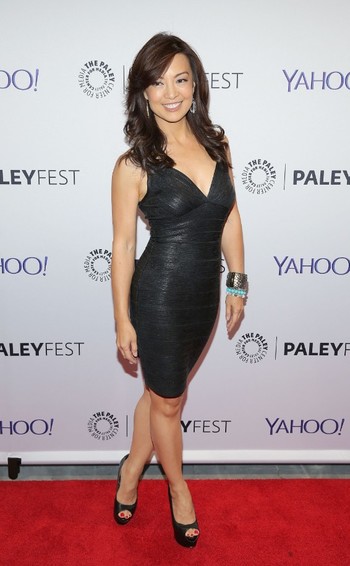 You don't meet a girl like that every dynasty.
"Believe in your dreams and never stop dreaming. Never stop believing that something that you want can happen."
Advertisement:

She grew up in Pittsburgh where her family still runs a Chinese restaurant, and there was cast in Mister Rogers' Neighborhood while attending Carnegie Mellon University. She received her first major role in 1988 on As the World Turns, then rose to stardom in The Joy Luck Club and ER. She also portrayed Chun Li in the live-action Street Fighter movie.

The Joy Luck Club started a productive relationship between Ming-Na and Disney, which continued when she voiced the titular heroine of Mulan. Later, she co-starred in Marvel's Agents of S.H.I.E.L.D. as Agent Melinda May. The Mandalorian turned her into a Promoted Fangirl of Star Wars, when she landed the role of Fennec Shand. Her success on television eventually earned her a star on the Hollywood Walk of Fame.

She shares two children with husband Eric Michael Zee, one of whom is voice actor Michaela Zee.