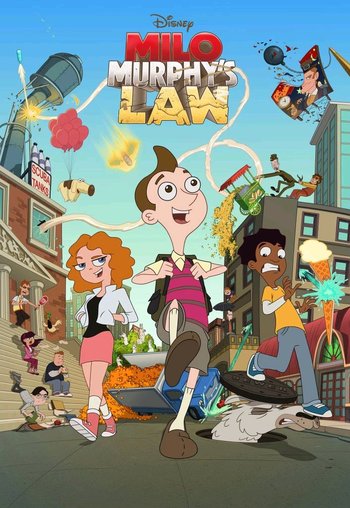 "Never boring even for a minute, it's my world and we're all living in it!" note Front row, left to right: Melissa, Milo, Zack. In the background on the left, top to bottom: Diogee, Elliot the Crossing Guard, Amanda, Mort, Bradley. In the background on the right, top to bottom: a Doctor Zone billboard, Cavendish and Dakota saving pistachios, Chad, Mr. Drako. All over the place: llamas.
Zack: I just can't handle [...] this cyclone of calamity that follows you everywhere you go! How do you live like this?!
Milo: How do you live like that?
Zack: What do you mean?
Milo: I mean, you want to live like those other kids? They took a bus to school today. A bus. Does that seem like more fun to you?
— "Going the Extra Milo"

Sometimes you just have a day where the entire universe seems out to get you. You tripped when getting out of bed, so now you have a big welt on your head. You missed the bus, so now you're late to class. You lost your tickets to that new sci-fi film you wanted to see, so now you have nothing to distract you from the weird plant monsters stalking you. It just seems that anything that can go wrong, will go wrong. Well, for one teenager, this isn't a pessimistic thought on a single bad day. It's a simple fact of life he's dealt with since birth and that he's more than gotten used to.

Milo Murphy's Law is an animated comedy series created by Dan Povenmire and Jeff "Swampy" Marsh that follows the life of the titular Milo Murphy (voiced by "Weird Al" Yankovic), and takes place in the same town of Danville as the duo's previous show, Phineas and Ferb. A descendant of the original Murphy of Murphy's Law, Milo was literally Born Unlucky and is doomed to having anything going wrong around him at a moments' notice. Despite this genetic curse, the ever-optimistic Milo takes it all in stride and manages to turn his endless string of misfortunes into exciting adventures for himself and his best friends. Meanwhile, a pair of time travelers are trying to make sure that the pistachio nut doesn't become extinct. This becomes surprisingly important.

The first episode premiered on October 3rd, 2016 on Disney XD. The series moved to Disney Channel for its second season, which began on January 5, 2019 with the crossover episode The Phineas and Ferb Effect. After the events of that episode, some members of the Phineas and Ferb cast (namely Dr. Heinz Doofenshmirtz) became recurring characters on Milo. The final episode of season two, "Sphere and Loathing in Outer Space", aired on May 18, 2019. Writer Joshua Pruett would confirm the same day that the show had not been greenlit for a third season

, with the production crew moving on to make the second Phineas and Ferb movie, entitled Candace Against the Universe.

The opening sequence can be viewed here

Has a recap page here and a character sheet here, both in need of Wiki Magic regarding season 2.

Doofenshmirtz steals Milo's spotlight and ends up subjecting to every disaster that Milo would avoid.

Doofenshmirtz steals Milo's spotlight and ends up subjecting to every disaster that Milo would avoid.