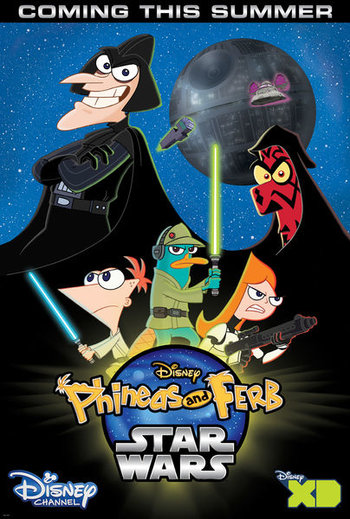 Use the Ferb, Phineas.
Episode IVa
MAY THE FERB BE WITH YOU

On the Desert planet of Tatooine
lived two happy young moisture
farmers, who had absolutely
no plans of leaving or getting
involved in any kind of
intergalactic shenanigans.

Unbeknownst to them the Galactic
Empire had recently finished
constructing its ultimate weapon,
the DEATH STAR.

Meanwhile, having learned the
whereabouts of the Death Star's
plans, the rebels send their best
platypus agent to obtain them, in
hopes of finding a weakness.

And none of this is canon, so just relax.
Advertisement:

A special crossover episode of Phineas and Ferb in its fourth season with the Star Wars universe. It first aired on Disney Channel on July 25, 2014, having premiered on the Watch Disney Channel online service and Disney XD On Demand on July 19, 2014.

The special is set a few summers ago in a galaxy far, far away, and a series of events leads Phineas and Ferb, cast here as two moisture farmers on Tatooine who are neighbors with Luke Skywalker, with the responsibility of saving the galaxy. It incorporates the plot from Star Wars Episode IV: A New Hope with the characters from the film interacting with the show's characters at certain points.

"Phineas and Ferb: Star Wars" has the following tropes: