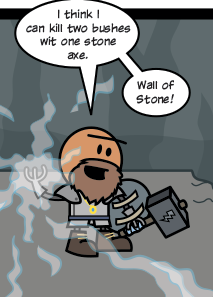 The Dwarven way of saying "killing two birds with one stone".
Gabe: This jackass just said that something can go "through a ferrocrete bunker like a neutrino through plasma." I get it, man. It says Star Wars on the cover. I know I'm reading about Star Wars. It's like, do they not have butter in space? Or hot knives to cut it with?
Tycho: Listen, don't get your mynocks in a... sarlacc.
— Penny Arcade, "San Diego Sketchbook: On Vibroblades"

The author uses a popular and/or modern phrase in a work of Speculative Fiction, and adjusts it to the setting by replacing certain concepts with their more-or-less appropriate counterparts. Works as a sort of Shout-Out to make the reader/viewer more at home in the world, while at the same time highlighting the difference; it can also be used to get in some cursing. Can backfire if the adjustment comes off as too arbitrary (e.g., if the proverb refers to concepts that should exist in the speculative setting as well).

At times these are specific to an exact scene, too. The replacement concepts can be tailored to characters and current action, rather than being a common phrase of its own. A cop with an antagonistic relationship to his Imperial liaison can sardonically say the liaison's investigation team got past security like X-Wings through a Death Star. In this way it can overlap with Remember When You Blew Up a Sun?, though it can refer to past moments anywhere on the spectrum of awesome and suck.

Related to Call a Rabbit a "Smeerp" and Future Slang in as much as they're all about creating immersion through language use. The difference is that Hold Your Hippogriffs is, for one, not about words but phrases; for another, Hold Your Hippogriffs doesn't always create new words, although it can. It's also related to Flintstone Theming, but with fewer puns.

Supertrope of Oh, My Gods!. Compare Space "X", a lazier version where "Space" (or another relevant series concept like "Wizard") is just put in phrases to make sure you know a Space X is different, and [Popular Saying], But... which also alters common sayings, but to create humor instead. Not related to Call a Pegasus a "Hippogriff". The inverse of this, when a word is replaced due to never having the chance to exist, is Orphaned Etymology.

It should be noted that many, but not all those following examples, mostly apply for their original language, as it's very difficult to pull this off in foreign translations, especially when dealing with complex idioms without equivalents in the target language.

Rarity, lying to go to a fancy party, claims she needs to use the "little fillies' room", a pun on "little girls' room".

Rarity, lying to go to a fancy party, claims she needs to use the "little fillies' room", a pun on "little girls' room".