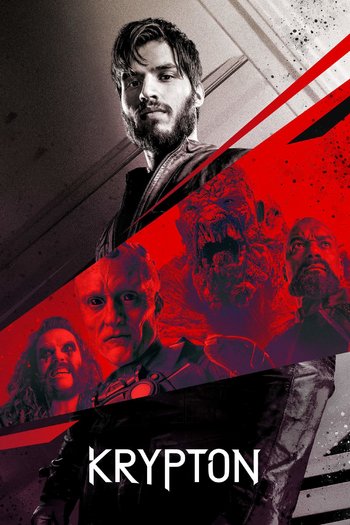 Bad day to be a hero.
Advertisement:

The story takes place on the planet Krypton, 200 years before its destruction and Kal-El's arrival on Earth. It follows Seg-El (Cameron Cuffe), Kal's grandfather. As a boy, Seg-El witnesses his grandfather Val-El (Ian McElhinney) being sentenced to death for sedition and heresy by the oppressive High Council of his city, Kandor. The House of El is dissolved, with its members deemed among the "Rankless", Krypton's underclass (making him just Seg, in practice).

Decades later, as a young man, Seg meets a stranger who claims to be from the planet Earth in the future, and that Seg's grandson will become "the greatest hero in the universe". However, this means an enemy, Brainiac (Blake Ritson) — who Val-El had discovered, to no avail — is coming to destroy Krypton to prevent that hero from ever existing. Now Seg must take up his grandfather's work and fight to redeem his family's honor, save his homeworld, and ensure the existence of Superman.

To promote the second season, a comic called Krypton: Tales from The Phantom Zone was released online.

A Spin-Off centering around Lobo, who debuted in Season 2, was said to be planned. In August 2019, Syfy announced that Krypton was cancelled and (seemingly) the Lobo spinoff with it, leaving the last plot threads of Season 2 unresolved.

The pilot provides examples of: